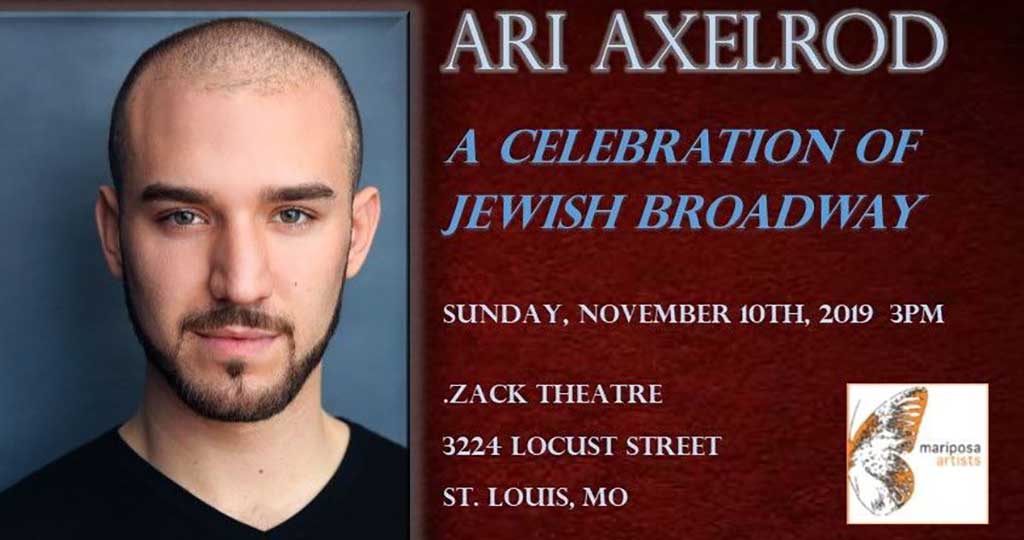 This event has been cancelled. Tickets purchased through MetroTix will be automatically refunded.

Ari Axelrod returns to St. Louis in “A Celebration of Jewish Broadway” which honors the songs and stories of Jewish composers and their contributions to the American Musical. Beloved melodies and lyrics by the likes of Irving Berlin, Leonard Bernstein, Stephen Schwartz, and Carole King will transport the audience back to the streets of the theatre district, your bubbie’s Shabbos table, or the places of your dreams.

Ari Axelrod's solo cabaret, "Taking the Wheel,” directed by Faith Prince and music directed by Alex Rybeck, has been performed in multiple cities including two sold-out performances at Feinstein's/54 Below in New York City. His theater credits include: Off-Broadway: Milk and Honey (Cantor/Sheep Boy) at The York Theatre Company. Regional: Spotlight Repertory Theatre: Fun Home (Roy). Weathervane Theatre: Last Five Years (Jamie), West Side Story (Riff), Hairspray (Corny Collins). Repertory Theatre of St. Louis: One Man Two Guvnors (Ensemble). He is also the founder and director of “Bridging the Gap”, a five-week master class series focused on bridging the gap between musical theatre and the intimate art of cabaret by honing the performer’s prior foundational training while stripping away the expectations of auditioning and getting in touch with your most authentic self.

"Throughout this performance, I was struck by Axelrod’s originality and authenticity. Every song sounded as if it had just been written…for him.” -David Sabella (Chicago, The Visit)

"In making his case for the contributions of great Jewish Composers to musical theater, Axelrod may have also inadvertently made a compelling case for his own contribution to Cabaret.” -David Sabella (Chicago, The Visit)

"As someone who's seen a myriad of Cabaret performances, I have rarely been as transported as I was by Ari Axelrod. Every song was a play I had never seen before, and he connected with his audience in a completely honest and loving manner. An old soul in a beautiful young man." -Alix Korey (Fiddler on the Roof, All Shook Up, Wild Party)

“He is a singing actor with a creamy voice, a sense of humor, and a fine theatrical sense.” -Bart Greenberg (Cabaret Scenes)

“To say that Ari Axelrod is the total package as a cabaret artist would be an understatement.” -Bart Greenberg (Cabaret Scenes)

The .ZACK is wheelchair accessible.