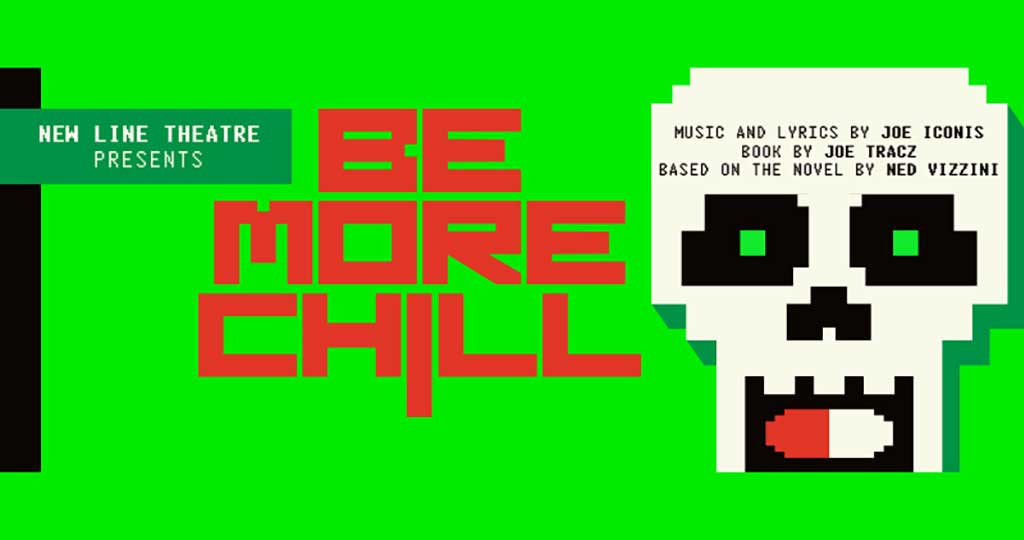 ALL REMAINING PERFORMANCES ARE SOLD OUT.

“Productions like this are exactly what contemporary theatre needs.”
- Tanya Seale, BroadwayWorld

“A startlingly fresh musical that avoids cliché to tell an exciting and at times very funny story about modern teenagers with a sci-fi twist.”
- Paul Friswold, The Riverfront Times

“The powerful connection between actors and theatergoers is electric and palpable.”
- Lynn Venhaus, St. Louis Limelight

"A wow of a musical that comes on like gangbusters."
- Rolling Stone

"If you fed Dear Evan Hansen and Mean Girls to the Little Shop of Horrors plant, Be More Chill is probably what you would get."
- The New Yorker

It’s a pill with a tiny supercomputer inside. Just take one, with some Mountain Dew, and a personalized voice inside your head will tell you how to be cool. Would you take it?

The Breakfast Club meets Little Shop of Horrors, as New Line closes its season in June with the new sci-fi rock musical BE MORE CHILL, with music and lyrics by Joe Iconis and book by Joe Tracz, based on the bestselling novel by Ned Vizzini. It’s an honest, fearless, funny look at life in the digital age, exploring teen depression, bullying, and other current issues through the comic lens of sci-fi films of the 50s, horror flicks of the 80s, and teen movies of the 90s. The show has been selling out everywhere it runs.

Jeremy is just an average, nothing-special teenage nerd -- until he finds out about the Squip ("Super Quantum Unit Intel Processor"), a tiny Japanese supercomputer in a convenient pill, which promises to "upgrade" him and bring him everything he desires most: a date with Christine, an invite to the coolest party of the year, and a chance to survive life in his suburban New Jersey high school.

Be More Chill made its world premiere at the Two River Theater in Red Bank, New Jersey in 2015, it's now being produced across the country, and it opens on Broadway this summer. BroadwayWorld called the show "a vibrant, inventive musical that makes the most of every moment." The New Jersey Star-Ledger called it "a high-energy, imaginative, well-crafted world premiere musical." The Tri-City News called it "sharp and smart, the musical perfectly balances the tragedy and hilarity of high school."