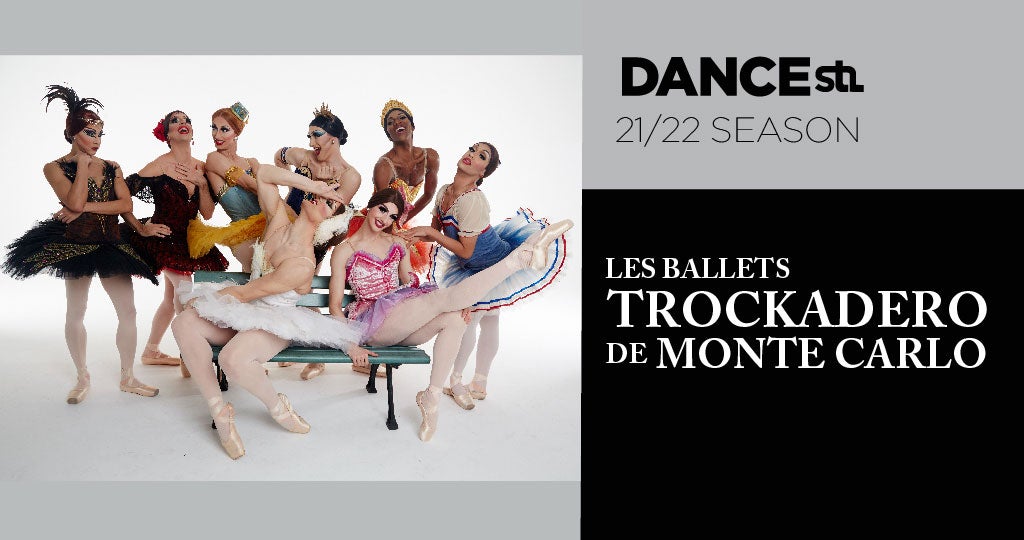 Direct from New York City and as seen in PBS’ "Ballerina Boys," it’s “the funniest night you will ever have at the ballet” (Sunday Times).

Since its founding in 1974, the all-male drag ballet company has performed in more than 600 cities in 40 countries across the globe, developing an international cult following and receiving worldwide acclaim and accolades as “an international treasure” and “one of the greatest acts on the planet” (The Express, London).

Les Ballets Trockadero de Monte Carlo is a company of professional male dancers performing the full range of the ballet and modern dance repertoire, including classical and original works in faithful renditions of the manners and conceits of those dance styles.

The comedy is achieved by incorporating and exaggerating the foibles, accidents, and underlying incongruities of serious dance.

The fact that men dance all the parts—heavy bodies delicately balancing on toes as swans, sylphs, water sprites, romantic princesses, angst-ridden Victorian ladies—enhances rather than mocks the spirit of dance as an art form, delighting and amusing the most knowledgeable, as well as novices, in the audiences.

The New York Times says, “The Trocks delight with fabulous charm” and “the men of Les Ballets Trockadero de Monte Carlo…. are comedians and dancers. But perhaps even more essentially, they are aficionados of their art.”

London’s The Express adds: "The secret behind their unique appeal is the balance between their comic pastiche and sheer skill."

“The Trocks are a guaranteed hoot for people who know nothing of ballet and an absolute must for those who think they know the originals," says the Sydney Star Observer.

Don’t miss the chance to experience the superb gentlemen of the Trocks! It’s an amazing production—a rare, special treat for the region!

Everyone entering the theatre must have a ticket, regardless of age.

Prices are subject to change.

Masks will also still be required for all audiences.

Dance St. Louis and the Touhill Performing Arts Center are Missouri ArtSafe certified by the Missouri Arts Council and the Missouri Arts Safety Alliance. This program is a standard for venues from St. Louis to Kansas City and everywhere in between. For more information, visit missouriartscouncil.org/missouri-artsafe.

Since opening in 2003, this St. Louis cultural landmark has already played host to hundreds of events for many organizations. The intimate 1,600-seat Anheuser-Busch Performance Hall is perfect for many medium sized concerts, amplified or acoustic, as well as dance and theater.  This hall also creates a unique environment for corporate keynotes, stakeholder meetings, or retreats.