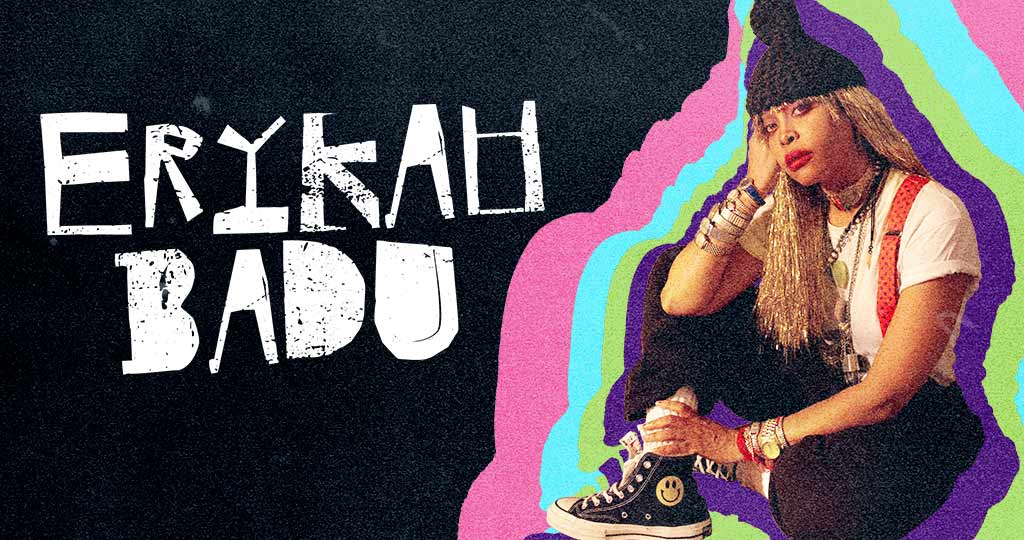 In 1997, following the release of her landmark debut album Baduizm, Erykah Badu was dubbed the “Queen of Neo-Soul” in the press. It was a fine enough title at the time; neo-soul was a nascent subgenre and journalists were trying to grapple with this new sound. But Badu was never just that, and was never meant to rule one thing. A forward-thinking creator, she was a gentle spirit and a badass, a multifaceted mix of tender R&B and old-school funk. So the title “Queen of Neo-Soul,” as regal as it sounds, could never capture Badu’s true depth — and 23 years later, she’s still defying the term.

The plan was to spend 2020 performing but the appearance of Covid of course canceled all tours for the foreseeable future. Never one to wait-it-out, Badu quickly pivoted and can now add the label “tech visionary” to all the other ones that have been applied to her in years past. She entered the tech space to create the ambitious Quarantine Concert Series: The Apocalypse which married technology with Badu’s creative vision to give users an unmatched, first-of-its kind, intimate and interactive steaming experience that maintains the integrity of her live shows. She charged fans just $1 to $3 to access a show that would normally have been $80 - $500 at a concert hall. “I didn't want to just put a phone on a tripod. That only feeds me,” Badu recalls, thinking of her band and crew. “I needed to figure out something that feeds all of us and I wanted the experience to have the integrity of my live show. I want to support an ecosystem that keeps musicians going.” Of the series, Badu told New York Times in Sunday’s Arts & Leisure cover story, she planned on sharing her new-found technical prowess and platform once she made all the mistakes first.

Making good on that promise, in September Badu launched her Too. Sensitive platform, a means for artists to showcase their live show. The genre-fluid series is curated by Erykah and presented by BaduWorldMarket and B dubya Streams. Too. Sensitive is being produced and directed in collaboration with the artists. There are no sponsors; the series is a direct line from artist-to-fan.

Since she burst on the scene in 1997, the Dallas based (and Texas proud) Badu has released 5 studio albums, countless singles and EPs, and has toured the world many times over. Since her debut Baduizm went multi-platinum, winning her two Grammys for Best Female R&B Vocal Performance and Best R&B Album, all of Erykah’s studio albums have debuted within the Top 15 of the Billboard Album Charts, with 4 of them debuting within the top 4. She has released 10 Top 10 singles on the Billboard Adult R&B Songs chart, including 3 #1s. In 2000 she won another Grammy (Rap Performance by a Duo or Group) for in 2003 she was awarded the Grammy for Best R&B single for her song “Love Of My Life (An Ode to Hip Hop).” Badu’s artistic and spiritual contributions to humanity earned her an honorary Doctorate degree in Humanities from Paul Quinn College in 2000.

She has three children, son Seven Sirius (b. 1997) and daughters Puma (b. 2004) and Mars Merkaba (b.2009). An advocate of natural childbirth Erykah has since become a doula herself.

From musician to tech CEO to music supervisor to mother, Badu continues to defy expectations and never stops creating and innovating. Be it music, fashion, or technology, she’s always been ahead of the curve.learning, reflecting, growing — peacefully thinking about the next steps in her storied career. “I’ve learned many things about myself over the years,” Badu says astutely. “I know now that I’ll have everything that is meant for me, so I don’t have to be urgent about anything, really. “I am a genius — I am,” she continues. “Genuinely. Creatively. Intellectually. Artistically. And I’m a girl. I’ve never heard a girl be called a Genius.

•  A photo ID must be presented along with the vaccination or negative test documents.

•  Guests under the age of 12 will not be required to provide proof of vaccination or a negative test, but will be required to wear a face mask at all times.

While we recognize these protocols will not provide perfect protection against contracting the COVID-19 virus, they represent our industry’s best chance to get back to presenting live entertainment for our audiences and much needed work for our associates.
See full list of COVID-19 Safety Protocols.

Everyone must have a ticket, regardless of age. Prices are subject to change.

Tickets will be delivered beginning approximately 1 week after the general on sale.