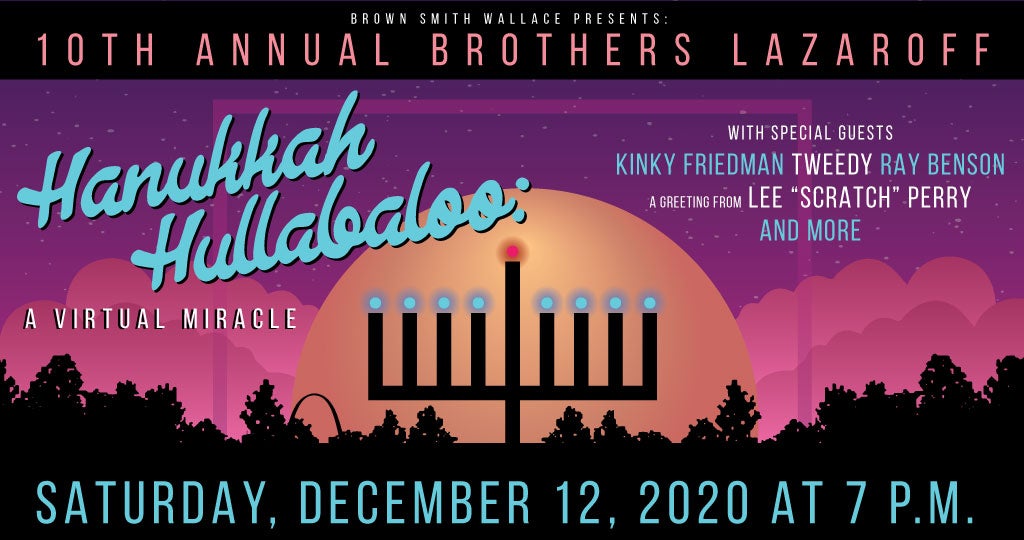 Brothers Jeff and David Lazaroff welcome fans to gather safely virtually as they broadcast “live” from the backyard around the bonfire. They'll be joined by special celebrity guests and features from Hullabaloo regulars, as well as the annual recitation of “Eight Nights,” a series of nine poems by Rabbi James Stone Goodman set to experimental and funky eastern European folk jams by The Eight Nights Orchestra. The Brothers' wives will be frying up latkes in their deep fryers and DJ Boogieman will man the giant menorah.

Some of the celebrity guests joining the Brothers virtually include:

The band will accept donations via MetroTix ticket purchase with all proceeds going to the National Independent Venue Association (NIVA) to support its #saveourstages initiative. You can also donate directly to NIVA via this link - https://secure.givelively.org/donate/national-independent-venue-foundation/hanukkah-hullablaoo. Independent venues and promoters were the first to close in March due to the pandemic, and they are still shuttered with no income and huge overhead. These small business owners are doing everything they can to survive, from draining their retirement savings to taking second mortgages on their homes. Seven months into the shutdown, they have had no meaningful federal assistance. 90 percent of NIVA members reported they could be forced to close forever without meaningful federal relief; hundreds have already permanently shuttered, never to return again. More than two million emails have gone to Congress people asking them to #SaveOurStages.

About Brothers Lazaroff
Describing Brothers Lazaroff and the music they play is no easy task. Shapeshifting through endless configurations from a 4-7 piece rock band to an 8-11 piece Jazz band, to World Music orchestra or stripped down roots combo, they float across genres playing their catalog of original songs with a family of St. Louis' finest musicians. Whether playing thrilling rock n' roll on a festival stage or the intimate confines of a listening room, Brothers Lazaroff mine their catalog of eight full-length albums to craft an experience and labor to give back as much energy as their loyal fan base gives to them. For more information, visit http://www.brotherslazaroff.com.