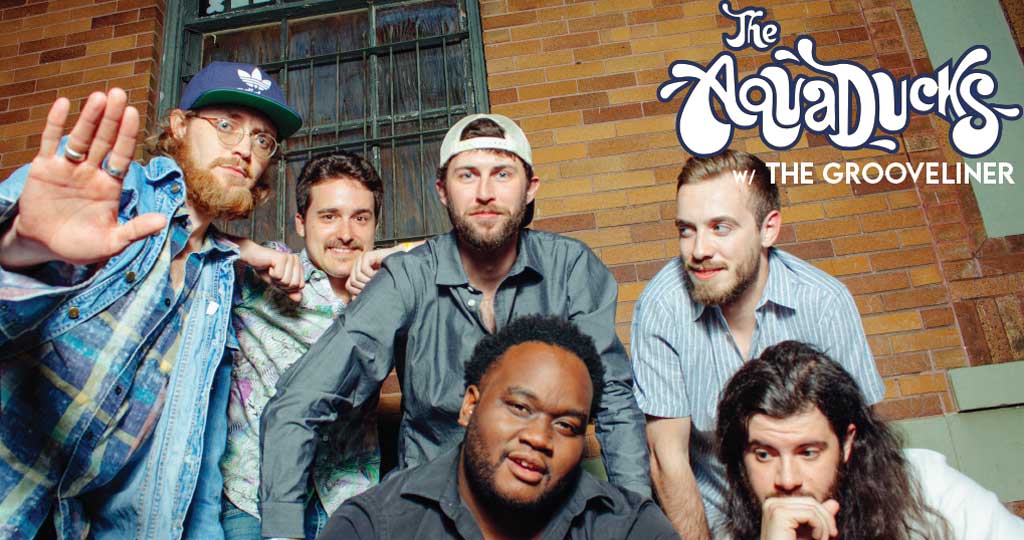 The Aquaducks are a high-energy funk and soul band from Nashville, TN with a fresh, yet nostalgic brand of modern funk music.

The Aquaducks’ live show is a party on the stage and off, from start to finish.  While the musical influence of artists such as Stevie Wonder, Earth Wind and Fire, and Lettuce provide enough musical meat to satisfy the appetites of even the most discerning critics, their light-hearted and fun approach to performance ensures that no-one in the audience is left behind.

The Ducks’ performances around the United States have included appearances at Bonnaroo, Rochester International Jazz Festival, FiBArk Festival, and numerous local and regional festivals.  They have had the honor of sharing bills with artists such as The Motet, George Porter Jr., Billy Strings, Anders Osborne, The California Honey Drops and The Werks.  Currently, the band’s tour schedules include stops throughout the Southeast, Colorado, Florida, the Midwest, and Northeast and they show no signs of slowing down as they continue their quest to share the funk with the world.

2019’s The Deep End release marked a new chapter in the life of The Aquaducks.  The five-song collection explores the deeper side of the band through its use of extended breakdowns and solo sections that impactfully contrast their catchy songwriting.  Upon release, the song “Got Me Funked Up” was featured as the second track on Spotify’s All Funked Up playlist, exposing the band’s music to a new wave of fans.

Described by Brooklyn, NY blog Pancakes and Whiskey as "Dripping with enough funk to fill several swimming pools," The Aquaducks have developed a strong audio-visual experience and established a long-term relationship with fans.  Join now, or be late to the party.

The Grooveliner was formed in February 2015 with the idea of keeping all the avenues of creativity open by not labeling themselves as a genre-specific group. Instead, The Grooveliner brings everything to the table with one consistent theme, IT MUST GROOVE!