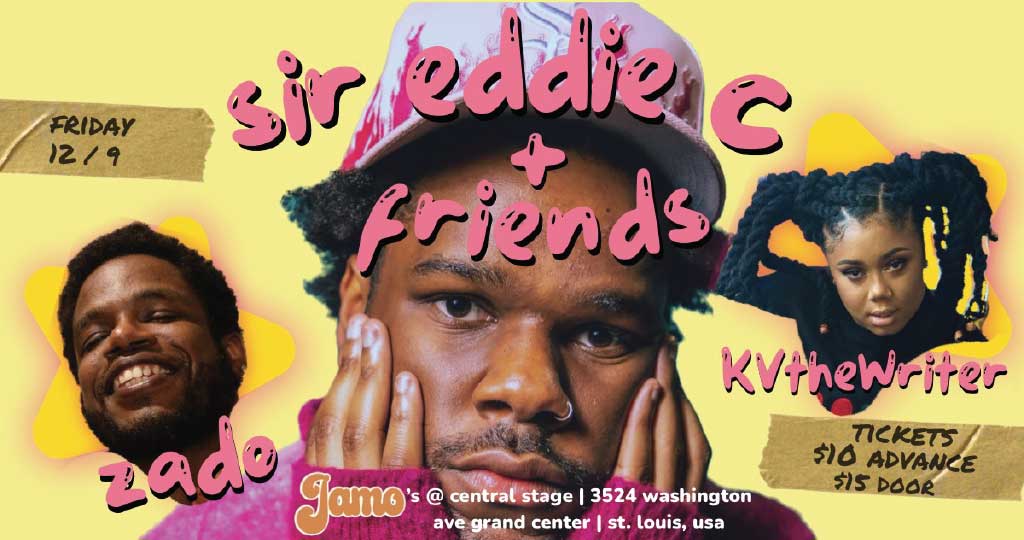 building his spaceship in St. Louis, MO is hip-hop artist Sir Eddie C. his music, which is self described as “regular people music” runs the gambit of topics, themes, + expressions. the musician intentionally crafts his music to reflect as many facets of the human experience. he uses his experiences to provide not only a look into himself, but also a mirror to the listener. with a penchant for colorful design aesthetics and a musical style reflective of previous hip-hop generations (that he refers to as “deja vu”), he is a clear standout in the St. Louis music scene.
born in Belleville, IL as Eddie Cox, Sir Eddie C gained an appreciation for music early as a child after borrowing a copy of Jay-Z’s “The Black Album” on a burned CD from a friend. his musical influences grew from there as he discovered artists like Pharrell, Lauryn Hill, Gym Class Heroes, Wale, + many more during hip-hop’s “blog era”.

his most impactful single to date has been “lil Black boy”. not only has it been heard by thousands of people, but the music video was also featured on “BET Jams”. that BET video premiere marked the first time Sir Eddie C’s music reached national audiences. beyond the musical impact, fueled by the concept of the song, Sir Eddie C + The Village Path were able to collaborate on a project that raised $16,000 for free mental sessions for Black men in the St. Louis area.

on may 5th, 2022, the artist released his newest ep, “gelato”. from the success of this ep, Sir Eddie C is currently enjoying a musical run that is rarely seen in music today. with his first headlining show “gelato after dark” completely selling out, an unprecedented full capacity event at sophie’s artist lounge + multiple sell out pop-up events, it is only a matter of time before this artist’s spaceship takes off.