Weedie Braimah & The Hands of Time at The Lot

Weedie Braimah & The Hands of Time at The Lot 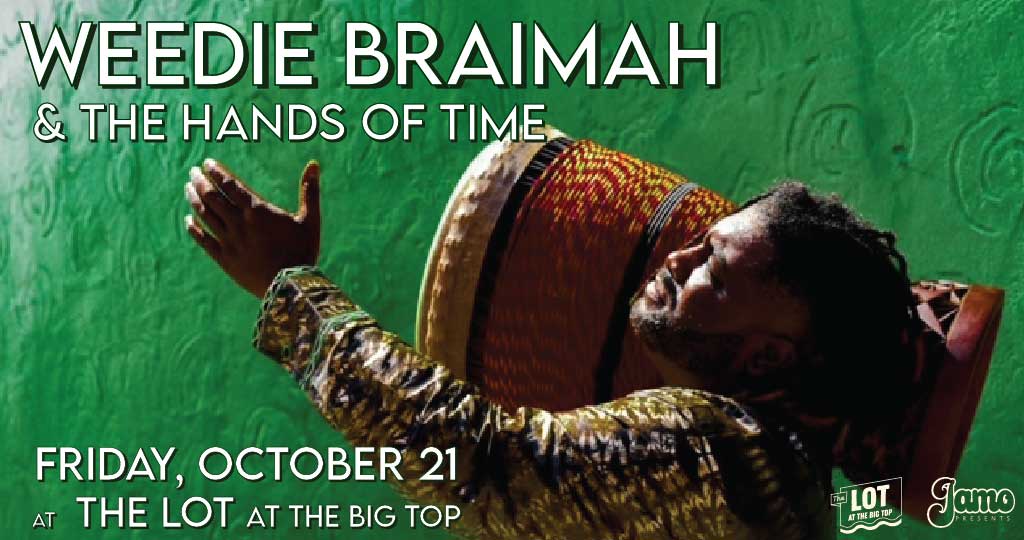 A Djembist, Composer, Producer and Folklorist of the highest caliber, Braimah has an almost insatiable knack to draw entire audiences into his groove, zigzagging through Africa on a breathtaking rhythmic roller coaster. His sound is the new voice of Djembe Music around the world.

Braimah comes from a long lineage of drummers including his mother, Ann Morris, a respected jazz drummer and his father, Oscar Sulley Braimah, a world-renowned composer and master drummer. Braimah has been a performer, teacher and preserver of African culture for over 30 years and continues to peruse new musical crossings every day. He also leads his own band, Weedie Braimah & The Hands of Time, where he mounts the Djembe as the frontage presenting music of the diaspora.

His band has appeared in Europe, Cuba, Dubai and the United States to name a few. Braimah’s debut album was also featured in Times Magazine as one of the top 10 albums of 2021. Braimah has been able to collaborate with world renowned artists such as Baaba Maal, Trombone Shorty, Pedrito Martinez, Oteil Burbridge, Terrace Martin and fellow bandmate, Christian Scott aTunde-Adjuah, who is nominated for Best Jazz Soloist on the song Sakoudougou, which is featured on Braimah’s debut album, The Hands of Time.

Weedie Braimah exemplifies tradition, evolution and soul as he brings his vision of building a reverence for folkloric West African music to life in hopes of it evolving and being placed in the world musical arenas of jazz, funk, fusion, world music, and hip hop, becoming the new face of African percussion both nationally and internationally.

There is a $3 minor surcharge at the door.

Purchase tickets to Weedie Braimah and Seun Kuti & Egypt 80 on Sep. 23 and save 10%!
CLICK HERE TO PURCHASE THE BUNDLE!

Seating charts will vary depending on the event.
Please check the specific event listing for seating details.