IN CONVERSATION WITH STEVE EWING

IN CONVERSATION WITH STEVE EWING 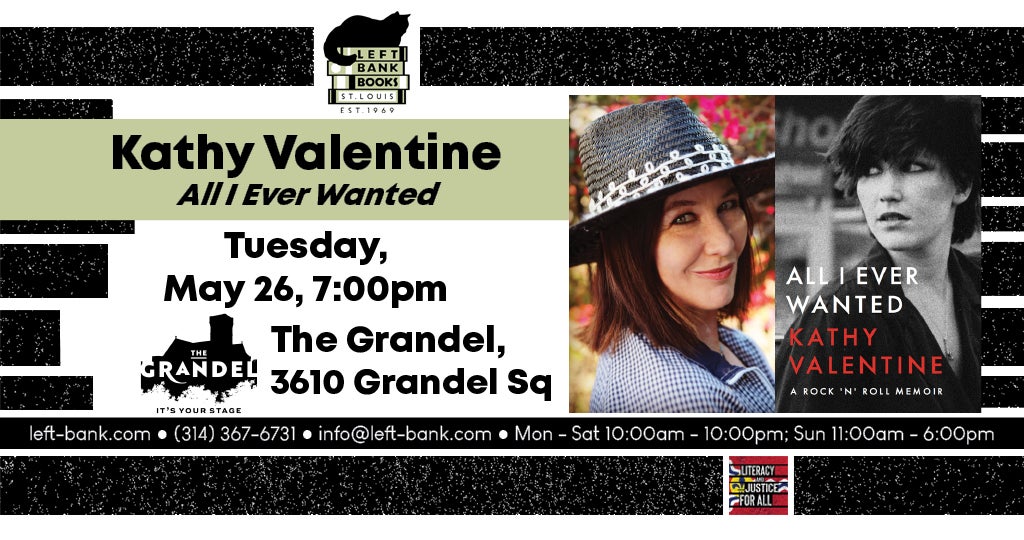 This event on May 26 has been cancelled. Refunds will be issued automatically to the credit card used in the order.

Left Bank Books presents musician, songwriter, and author Kathy Valentine, who will discuss her book All I Ever Wanted, a memoir of her time as bass player with the all-female band the Go-Go's, on Facebook Live at 7pm on April 27. Kathy will be in conversation with journalist Annie Zaleski. Join us for this interactive conversation on our Facebook Page and order a copy of All I Ever Wanted from Left Bank Books to support authors and independent bookstores!

Left Bank Books presents musician, songwriter, and author Kathy Valentine, who will sign and discuss her book All I Ever Wanted, a memoir of her time as bass player with the all-female band the Go-Go's. Kathy will be in conversation Steve Ewing, former lead singer for the Urge.

At twenty-one, Kathy Valentine was at the Whisky in Los Angeles when she met a guitarist from a fledgling band called the Go-Go's--and the band needed a bassist. The Go-Go's became the first multi-platinum-selling, all-female band to play instruments themselves, write their own songs, and have a number one album. Their debut, Beauty and the Beat, spent six weeks at the top of the Billboard 200 and featured the hit songs "We Got the Beat" and "Our Lips Are Sealed." The record's success brought the pressures of a relentless workload and schedule culminating in a wild, hazy, substance-fueled tour that took the band from the club circuit to arenas, where fans, promoters, and crew were more than ready to keep the party going.

For Valentine, the band's success was the fulfillment of a lifelong dream--but it's only part of her story. All I Ever Wanted traces the path that took her from her childhood in Texas--where she all but raised herself--to the height of rock n' roll stardom, devastation after the collapse of the band that had come to define her, and the quest to regain her sense of self after its end. Valentine also speaks candidly about the lasting effects of parental betrayal, abortion, rape, and her struggles with drugs and alcohol--and the music that saved her every step of the way. Populated with vivid portraits of Valentine's interactions during the 1980s with musicians and actors from the Police and Rod Stewart to John Belushi and Rob Lowe, All I Ever Wanted is a deeply personal reflection on a life spent in music.

Kathy Valentine is a working musician and songwriter known for being part of the all-female band the Go-Go's. She wrote or cowrote many of the band's most renowned songs, including "Vacation" and "Head Over Heels." In addition to playing music and writing songs, Valentine has worked as an actor, public speaker and spokesperson, and producer. In 2017 she created "She Factory," an event series to raise money for women-centered nonprofits. She currently lives in her hometown of Austin with her daughter, where she plays in a band and is completing her first college degree.