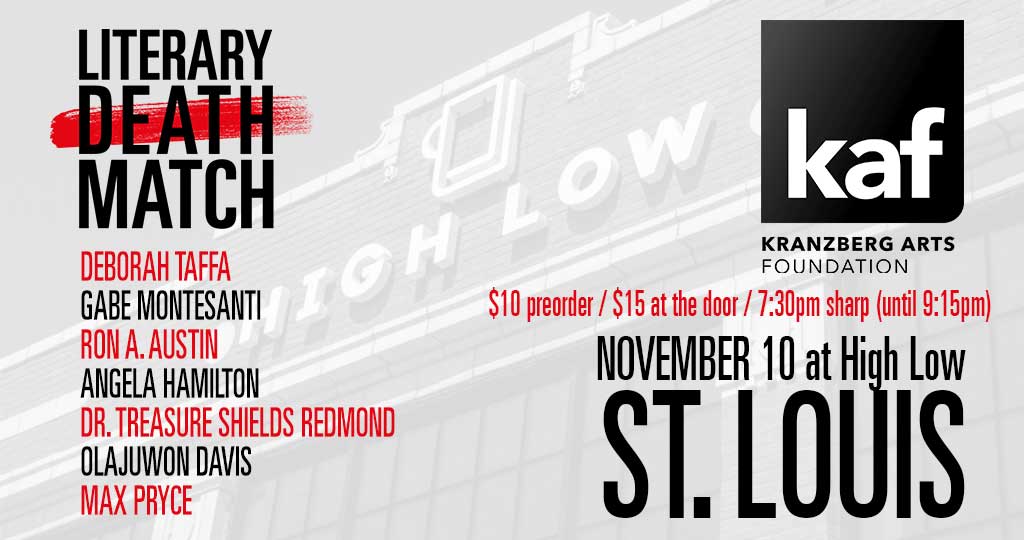 Literary Death Match makes its long-awaited St. Louis debut in a homecoming for the ages (LDM creator Adrian Todd Zuniga is a STL native), as we head to High Low (part of the brilliant Kranzberg Arts Foundation) and bring together a sensational lineup of the Midwest's best. This historic night will be one to remember — don't you dare miss it!

JUDGES:
Literary Merit: Dr. Treasure Shields Redmond, poet and author of chop: 30 kwansabas for fannie lou hamer, performer, and educator, and a Cave Canem fellow with an MFA from the University of Memphis and a PhD from Indiana University of Pennsylvania

READERS:
Round 1:
* Gabe Montesanti, a queer, Midwestern roller-derby player and author of roller-derby memoir Brace for Impact; her piece, "The Worldwide Roller Derby Convention" was named a notable essay in The Best American Essays 2020

* Ron A. Austin, author of Avery Colt Is a Snake, a Thief, a Liar, a collection of linked stories that won the 2017 Nilsen Prize, was a 2019 Foreward INDIES GOLD Award winner, and was nominated for the  PEN/Robert W. Bingham Prize and a 2020 Hurston/Wright Legacy Award

Round 2:
* Deborah Taffa, winner of the PEN Jean Stein Grant, her memoir Whiskey Tender is forthcoming from Harper Collins in 2023, she's a Kranzberg, MacDowell, Hedgebrook, and Tin House Fellow, and director of the MFA Creative Writing program at IAIA (Institute of American Indian Arts)

* Angela Hamilton, essayist who has appeared in The Southeast Review, Quarterly West and The MacGuffin; a Fulbright scholar who's taught in Jordan and Turkey; and an associate professor of English at St. Louis Community College