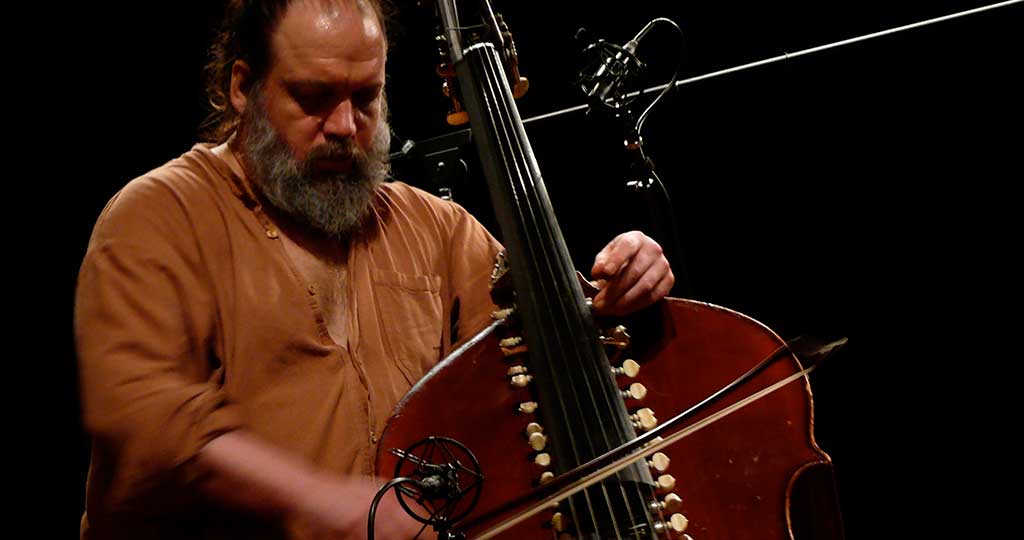 It was almost exactly twenty years ago at the Sheldon Concert Hall on November 18, 1999 that visionary artist and St. Louis native, Mark Deutsch premiered to the world his singular creation, the Bazantar: a 39-string acoustic bass with additional drone and sympathetic strings, for which he received a patent along with worldwide acclaim as a unique musical innovator. "What Mark has done really expands the horizon of the bass. The sound created on the Bazantar is like nothing ever heard before..." - Eric Harris, Principal Bassist, St. Louis Symphony "…a visceral reaction akin to my stunned and delighted response to first hearing a symphony orchestra..." - David Walter, Instructor at Julliard, Principal Bassist New York Philharmonic Not long after that performance, Mark moved his base of operation to the West Coast where he has been evolving, further defining and refining his instrument and techniques as well as creating a vast library of original Bazantar compositions, doing film work and recording new music. His latest release is the epic work, “The Picasso Tunings,” a four-volume series of compositions (4CD, 7LP vinyl box set) for solo Bazantar that spans a vast landscape of musical styles and traditions. "Mark's sonic explorations invoke the ancient tradition of trance-ritual and embody a sacred musicality rarely heard in Western cultures." - Bill Laswell, Producer, Audio Alchemist and Bassist "Mark Deutsch has created explorations into the depths of sound where the roots of tonality beneath Eastern and Western systems are one. This historic tone poem bridges the dark opulence of tone to the high visionary sounds of the spirit. A must for all sonic adventurers.” - Don Campbell, Author of "The Mozart Effect.” Recently he was the featured artist on the score for the movie Drone, which was nominated for a Leo Award for best music score, and he is currently on tour driving from San Francisco to New York doing solo Bazantar concerts along the way as well as teaching and lecturing about music and vibrations’ effects on physiology and consciousness. This will be his first show in St. Louis since leaving almost twenty years ago. Come and see what Mark’s been up to and how things have evolved in the interim. “What has Mark Deutsch done? In the simplest terms, he’s spent decades building a new acoustic instrument, the Bazantar, in which more harmonics can interact with each other with clarity than in any other instrument, and then created music with a higher order of resonance than previous music. Listen and know you’re one of the early ones, one of the few. You are listening to the future." - Jaron Lanier, “Founding Father" in virtual reality, Futurist, Computer Scientist, Composer and Author of “You Are Not a Gadget” and “Who Owns the Future?” Below is a short documentary and other videos about Mark and the Bazantar if you would like to know a bit more about him and the creation of this new acoustic instrument.