Benefitting the Arts in Kirkwood

Benefitting the Arts in Kirkwood 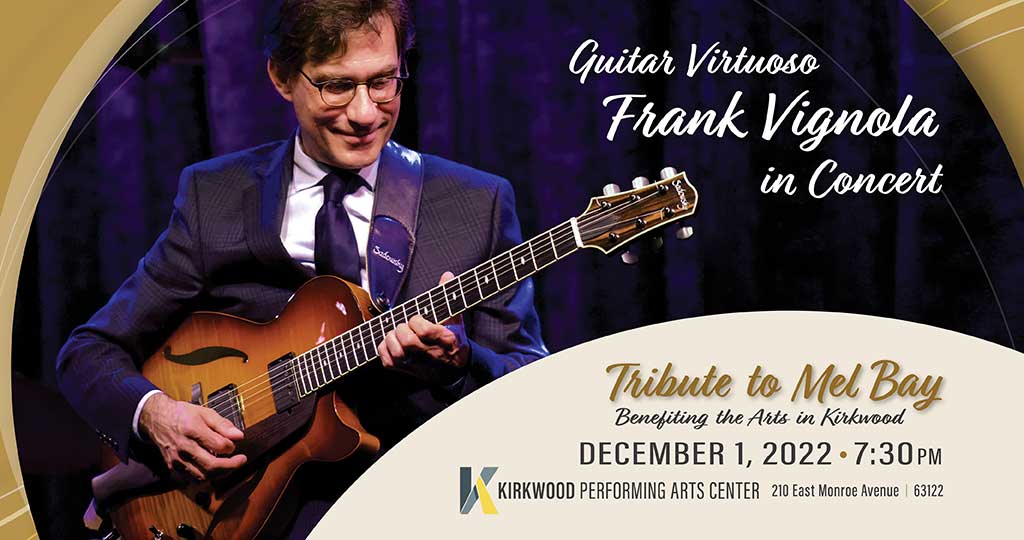 In the Ross Family Theatre at the Kirkwood Performing Arts Center

The evening's program will be hosted by Ruth Ezell, Senior Producer at Nine PBS. It will begin with a short set from the Kirkwood High School Jazz Band followed by a brief intermission, and will conclude with a performance by Frank Vignola with Vinny Raniolo and Gary Mazzaroppi. Money raised from this benefit event, presented in tandem by the Kirkwood Arts Foundation and Kirkwood Arts Commission, will help fund our community arts programs and programs for young people and teens, including the music program at Kirkwood High School.

Frank Vignola is one of the most popular and sought-after guitarists on the international music scene. He currently plays every Wednesday at the world-famous Birdland Jazz Club in New York City.

Having performed with everyone from Ringo Starr, Madonna, and Tommy Emmanuel to guitar legend Les Paul, Vignola's dynamic genre-spanning music has taken him to 21 countries, performing at the Sydney Opera House, Carnegie Hall, and Lincoln Center. His repertoire includes everything from classical, fusion and swing to gypsy jazz and pop.

Mel Bay (1913-1997) is a legendary figure in the history of modern guitar. Perhaps most well-known for his Modern Guitar Method books that have sold more than 25 million copies, his clear and simple instruction manuals established the basis for modern guitar pedagogy and enabled the growth in popularity of the guitar world-wide. Finding an accomplished guitarist today who hasn't been influenced by a Mel Bay book would be nearly impossible.

From his downtown Kirkwood studio and store, Bay rented and sold musical instruments and sheet music, and taught up to 100 students a week, while remaining an incessant performer as a radio staff-guitarist, leader of his Mel Bay Trio, or stringed instrument player with local and traveling bands.

Throughout his long career, Bay received numerous awards, including a Lifetime Achievement award from the Guitar Foundation of America and a star on the St. Louis Walk of Fame.

Please note that tickets for Stages and The Rep at the Kirkwood Performing Arts Center are not available through MetroTix. Please visit their websites through the links below:
STAGES Ticketing
THE REP Ticketing