"BUT BABY I LOVE YOU COMEDY SHOW PT. 9" BY LARRY GREENE

"BUT BABY I LOVE YOU COMEDY SHOW PT. 9" BY LARRY GREENE 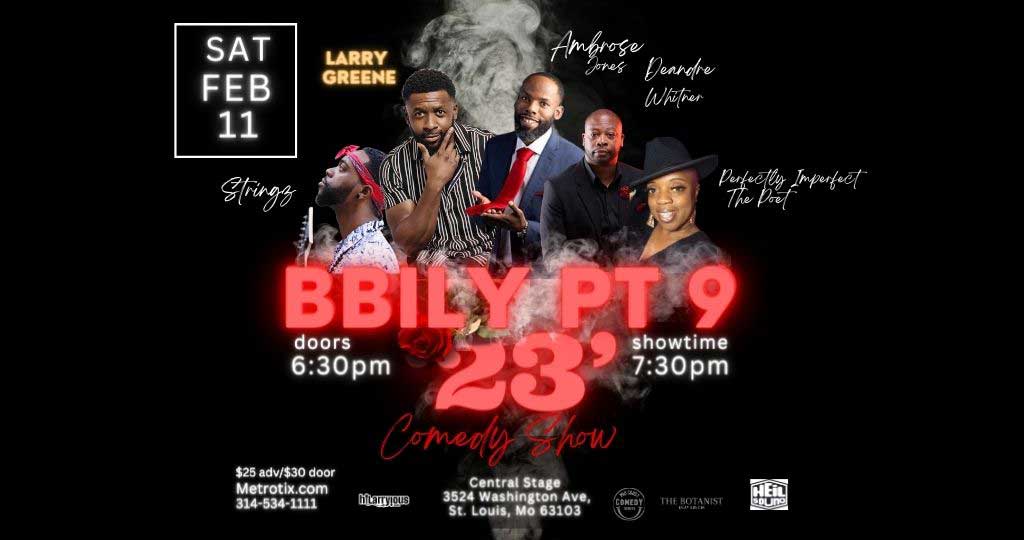 But Baby I Love You pt. 9, is an annual sell out comedy show produced by Comedian, Larry Greene. This show features Comedians, poets, singers, and more. The show was inspired by Larry in an effort to bring a mature quality comedy event for couples and singles to celebrate life. It’s titled BBILY because we all know love isn’t always pretty but we can laugh about it as we work through it. This year is featuring amazing national & local talent.

Larry Greene is a comedian from St. Louis, MO. He’s known for his charm and witty sense of humor. He’s the first comedian to win both the Helium Comedy Club competition & the St. Louis Funny Bone competition in the same year. He’s performed at numerous clubs throughout the country headlining one-night only shows at clubs like the Kansas City Improv. His comedy album titled "Fashionably Late" is streaming on all platforms with over 32,000 unique downloads. On his rise to headliner status, Larry is proud to have opened for legendary comics, Paul Mooney, Honest John, and more. Among his accomplishments, Larry counts producing “But Baby I Love You” as one of his favorite accomplishments, that’s 9 years running. Yooo!

Featuring Headliner: Ambrose Jones
A laconic, self-deprecating comedian, Ambrose embarked on his comedy career in Memphis, TN. Being originally from Chicago, IL makes no sense at all, but he still found a way to turn his southern humor and unique point of view into a brand. Within only 8 years of stand-up, Jones has been a full-time feature act for 3 years. He has already performed at some of the top comedy venues in the business. Comedy Off Broadway, Richmond Funny bone, West Palm Beach Improv, Stardome, Zanies, Comedy House, Vb Funny bone, just to name a few.

He has previously showcased his talent on NBC for Last Comic Standing. Keenan Ivory Wayans said "He is like a breath of fresh air." and "Reminds him of a country Chris Rock" Ellen tweeted "You killed it on LCS" Jones earned his way to the top 40 semifinalists.

During the 2nd audition of LCS at Gotham Comedy Club in NYC, Ambrose was approached by the owner of the club and asked to perform on Gotham Live which is a tv show filmed live at the club and aired on Axs Tv earlier this year.

This show features an amazing lineup of comedians, singers, & poets. Do not miss out on this year's "But Baby I Love You, Pt. 9" at the ultra professional "Central Stage" in the beautiful Grand Center Arts District.