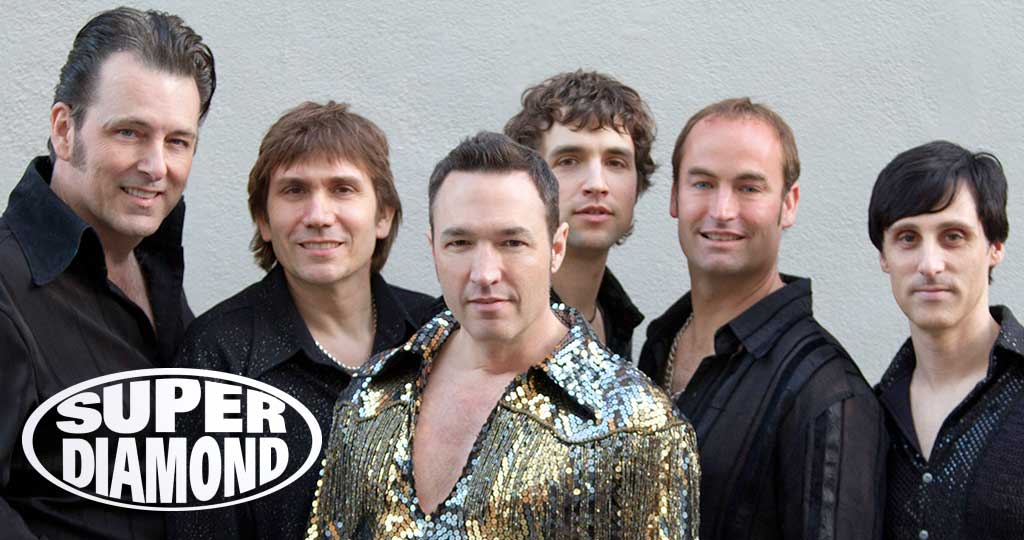 "I've met them and I have been to their shows, they're wonderful!"
-Neil Diamond to Katie Couric on the Today Show, November 9. 2005

San Francisco's Super Diamond has become one of the most popular live shows at major nightclubs, theaters, ballrooms and public events throughout the United States. For over a decade the band has consistently performed sell-out shows at venues such as Irving Plaza in New York, 930 Club in Washington D.C., Bimbo's in San Francisco, and House of Blues venues in Chicago, Los Angeles, San Diego, Cleveland and Dallas, to name but a few.

At these venues, Super Diamond has generated an exuberant audience response previously unheard of for a tribute band. Many would say that Super Diamond has transcended the label of "tribute band" by passionately immersing themselves in Neil Diamond's huge repertoire and delivering a high-octane show of unforgettable classics such as Cracklin' Rosie, Sweet Caroline, Forever in Blue Jeans and many others.

Super Diamond has also performed at landmark venues and events such as the Hollywood Bowl, Taste of Chicago, Fenway Park in Boston, Coors Field in Denver and numerous fairs, festivals and corporate celebrations across the country and overseas.

Super Diamond front man The Surreal Neil, Randy Cordeiro, astonishes audiences with his live interpretation of the "real Neil." Randy created the charismatic character when he discovered he had the uncanny ability to capture not only Neil Diamond's voice, but also his mannerisms and performance style. Randy formed Super Diamond with founding members Matt Tidmarsh (bass guitar), Rama Kolesnikow (keyboards), and his childhood friend James Terris (keyboards), and soon after attracted the stellar talents of Chris Collins (guitar) and Vince Littleton (drums). With a dedication to performing a dazzling, rockin' show and a reputation as one of the best live bands in the country, Super Diamond continuously draws full-capacity crowds and has a loyal, dedicated and ever-expanding fan base that bridges generations.

Super Diamond has caught the attention of major media publications such as Rolling Stone Magazine, Spin Magazine, New York Times, San Franciso Chronicle, Washington Post and LA Times. The band has been featured on CNN, Fox News, MSNBC, Comedy Central and interviewed for VH1's "Behind the Music-Neil Diamond" episode. In November 2008 Super Diamond was seen by millions when they were the musical guests on "The Late Show with David Letterman."

Super Diamond's dream came true when Neil Diamond joined them on stage for a surprise appearance at the House of Blues in Hollywood - a moment of endorsement that swelled the band members' hearts and stunned the audience that night. Neil Diamond also praised the band when questioned about the success of Super Diamond by Katie Couric and Larry King on national television. Super Diamond was fortunate to be joined on stage by Neil Diamond a second time, at the premiere party for the movie Saving Silverman, and has been delighted over the years to bring on stage current and former members of Neil Diamond's touring band.

VIP: ticket includes entry to the concert, assigned seating in the VIP area, and access to the VIP tent on the side of the stage with private concession booth.

Reserved: ticket includes entry to the concert, assigned seating in the first 15 rows (does NOT include reserved parking).

General Admission: ticket provides entry to the concert and seating on the general admission lawn area.